These luxury homes, inns and restaurants are now available

The government wants to stop the unreasonable rise in energy prices

Today’s Chinese horoscope for December 3: predictions for each sign

White teeth and an attractive smile – whitening devices are promoted online with such slogans and promise instant visible results. Teeth are whitened by an oxidation reaction caused by peroxide. It’s a myth that devices that can be purchased online actually have an effect on the color of teeth, as dentist and whitening expert Karl Glockner from Med-Uni Graz explains: “Since October 2012, there has been an EU directive mandating whitening 0 percent. Peroxide agents 1 to 6 can only be used and purchased by dentists. Any substance below this level has no bleaching effect.”

Also, teeth whitening requires prior professional teeth cleaning, according to Glockner. “In order for the teeth to be whitened, the naturally occurring plaque on the teeth must first be removed,” he says. A polishing paste or powder is used for this. Why is it necessary to remove the coating? “Otherwise only the surface will be bleached, which will darken after a few days and therefore invalidate the result.”

Another factor that is not considered when using home whitening products on teeth is fillings. “These cannot be bleached, they retain their color, so dark areas remain on the tooth.” In dentistry, it is therefore recommended in advance to people who want to whiten their teeth. Root-treated teeth also require a special treatment. “These teeth are usually darker due to bleeding afterward, in which case bleach is filled behind the hole that already exists due to root canal treatment. This makes it lighter,” says Glockner.

Hydrogen peroxide is sold to dentists for one reason only. “At high concentrations, the agent has a caustic effect on the gums, so everything needs to be pre-coated to protect the oral cavity, even with professional treatments,” says Glockner. The temperature at which the teeth are whitened should not exceed 43 degrees, otherwise the tooth will die, explains the doctor.

“Suicide for the Teeth” 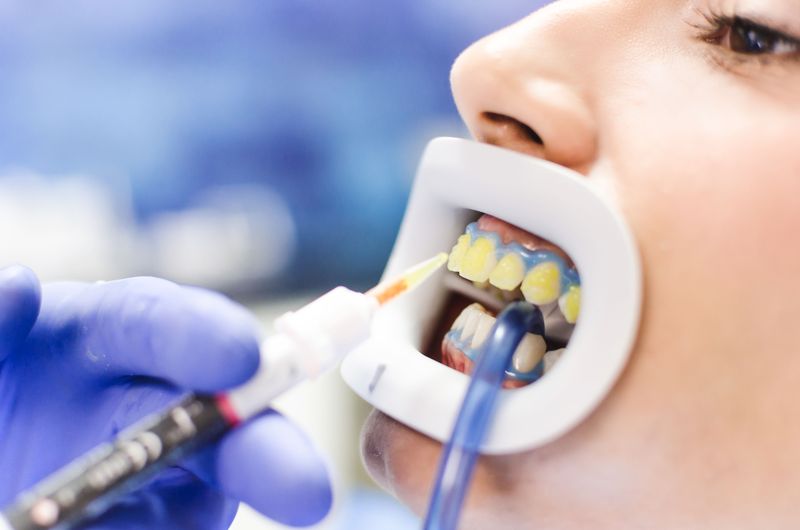 At the dentist, you can have your teeth professionally cleaned up to four times a year with a slow rotating brush or a powder spray device, which in some cases lightens the teeth and above all keeps the entire periodontium healthy in the long run. “With this method, enamel remineralizes itself within a few weeks and does not disappear,” says Glockner. Another professional method with a long lasting effect is custom splints that can be filled with 3% hydrogen and then worn at night. “The dosage is small and therefore harmless.” The result will be checked after a week.

Do your gums bleed? This is why and this is how you can fix it

Symptoms and treatment: What you need to know about RSV

Concentrated work: why it’s so difficult – and what helps

These luxury homes, inns and restaurants are now available

The government wants to stop the unreasonable rise in energy prices

Today’s Chinese horoscope for December 3: predictions for each sign

Stormtrooper Ozzy Osbourne (74) has changed beyond recognition: he’s an old man with a cane, his health bothers him

Today’s horoscope for Gemini for December 3, 2022.

Everything we know about the Mayfair witches

Was Norman Reedus the cause of Melissa McBride’s departure from The Walking Dead?

How many Wandinha seasons are planned?

Where’s Baby Sun from the Teletubbies?

Do your gums bleed? This is why and this is how you can fix it

Symptoms and treatment: What you need to know about RSV

Concentrated work: why it’s so difficult – and what helps

Volvo announces the arrival in Chile of the new VM trucks

Audi will build an exclusive building for Formula 1

The first copies of the Tesla truck are delivered

BMW X1: the third generation arrives with a technological and safety leap

The Storiest is an editorial content website that brings you fresh stories every minute from around the world. From commerce and entertainment to pop culture and food, we cover everything that interest our audience, mostly Gen Z.